THE LYRE
The aim has been to create a lyre with a clear and light-filled sound, carried by the material's own tone quality. To achieve this, the strings are brought into balance with the static resistance of the shaped wood, which is needed so that the whole body of the lyre will be penetrated and resound with the tone's movement and evoke the inherent sound qualities of the wood itself. In this living process, the”voice” of the instrument has its origin. The lyre is made out of maple wood.

ADJUSTABLE SOUND CHARACTER
One particular feature on this instrument is the construction that allows you to adjust the lyre so that it comes closer to your personal sound ideal.
The bridge on the LSK-lyre is possible to move up and down along the strings. If you move it up, towards the tuning pegs you will shorten the active, sounding string length. Doing this you will achieve two things: lowering the string tension AND the bridge will come closer to the centre of the reasoning board The change of these two parameters will, both separately and  even more efficient together, result in a warmer, more colourful sounding tone. It will become softer to play but with a slightly stronger attack when you play the tone.

If you move the bridge in the opposite direction downwards, away from the tuning pegs, you will make the sounding part of the string longer. This will result in two things; the string tension will become higher AND the bridge will be closer to the rime of the sound board. Both these changes will contribute to a somewhat “colder”, more crystalline and louder tone. It will be a little harder to strike and have a less pregnant attack as you play it.

So, when you start to work with the Auris 30 stringed lyre you will have the possibility to find out what position of the bridge will give the tone quality and playability that you prefer. 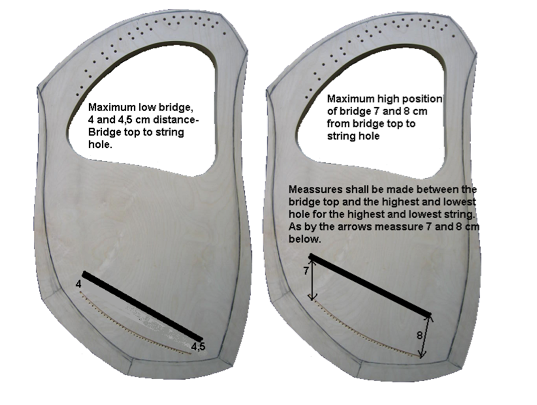 STABILITY
When you do the research regarding your most favourable bridge placement, crucial to always keep in mind that the more you raise the string tension the higher the risk that the lyre body will surrender to the higher string tension and over a certain point of tension begin to bend. This is especially important to observe and avoid in places with a high humidity and warm climate.

STRIKING THE TONE In order to obtain warm and full sound, a support-string technique is recommended. Hold the hands so that the fingers lay almost parallel to the strings (pict.1).  Place the finger on the string to be played as shown in picture 2 and feel the ”weight” of the warm and relaxed  hand on the string. Make a light press-pull movement and then release the string. Let the finger land on the next higher ”support-string” – do not pull it away from the lyre, it makes the tone harder. One can imagine oneself shooting with a miniature bow and arrow. Just as the archer waits until he has his target clearly in sight before releasing the string; so must the player of the lyre become "one" with the coming tone, inwardly preparing the let go of the string and then follow the rising and subsiding tone. A free and dynamic playing style can be attained through a careful practise of this basic technique. Quick runs and arpeggios will be possible to perform with the same warmth and fullness as single tones. Also chords can be played by using this same technique with several fingers at the simultaneously. 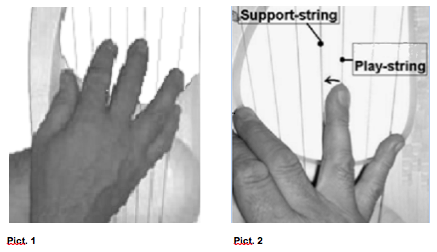 CHANGING THE STRINGS
The strings are changed either when they no longer hold a clear tone or when they have broken. When you change a broken string you must not forget to unscrew the tuning pin as many turns as it has been tightened. This will be about three or three and a half turns. The tuning pins have left hand threads which means that they screw out clockwise, and in counter-clockwise. When the new string is placed on the lyre, it is attached to the pin as shown in pict.A and wound up as in pict.B.